Lord Doneraile’s set of 1844 Ordinance Survey of Ireland comes under the hammer!

Hegarty’s next auction on Sunday, 3rd April 2016 contains some rare and important historical items, along with a fine selection of antique furniture, collectables and Irish Art.  The sale will include the contents of the collection of the late Margaret Ridgeway, founder of the Kilcolman National Nature Reserve in Doneraile, Co. Cork and will include items of historical interest, some of which were previously in the collection of Doneraile Court – the most important to include the 1844 Ordinance Survey of Ireland, Cork & Waterford maps by Captain Larcombe, commisisoned by Lord Doneraile and used by him on his regular hunting trips. 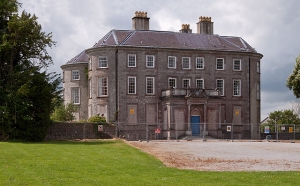 [Lord Doneraile was a popular hunting man who one day came on some local people digging out foxes. They had unearthed a young cub which they were reluctant to kill and His Lordship asked if he could have it. They agreed and he reared the fox as his pet and took it everywhere as his mascot. Unfortunately the fox lead to his eventual downfall. The fox contracted rabies and bit His Lordship as well as his coachman Barrer in early January 1887. They both went to Paris to Louis Pasteur and stayed a month getting Pasteur’s new vaccination treatment and came home ostensibly cured. While Barrer never looked back, Lord Doneraile fell ill with what was described as hydrophobia or rabies in August of 1887. Though tended by the best doctors in Cork who kept in touch with doctors in London and Pasteur in Paris, Lord Doneraile was dead within a week. Thus began the legend that Lord Doneraile may have been the last person in Ireland to have died from rabies].

Belt plate of the Kinnalea and Kerricurrihy Cavalry for Auction at Hegartys, Bandon on Sunday 3rd April 2016 at 3pm.

Also of interest will be the the belt plate of the Kinnalea and Kerricurrihy Cavalry, previously in the Westhorpe Collection and featured in the Cork Historical Journal, the only one known in the world.  The belt plate closely remembers those worn by the Royal Cork volunteers.

This entry was posted in Uncategorized. Bookmark the permalink.